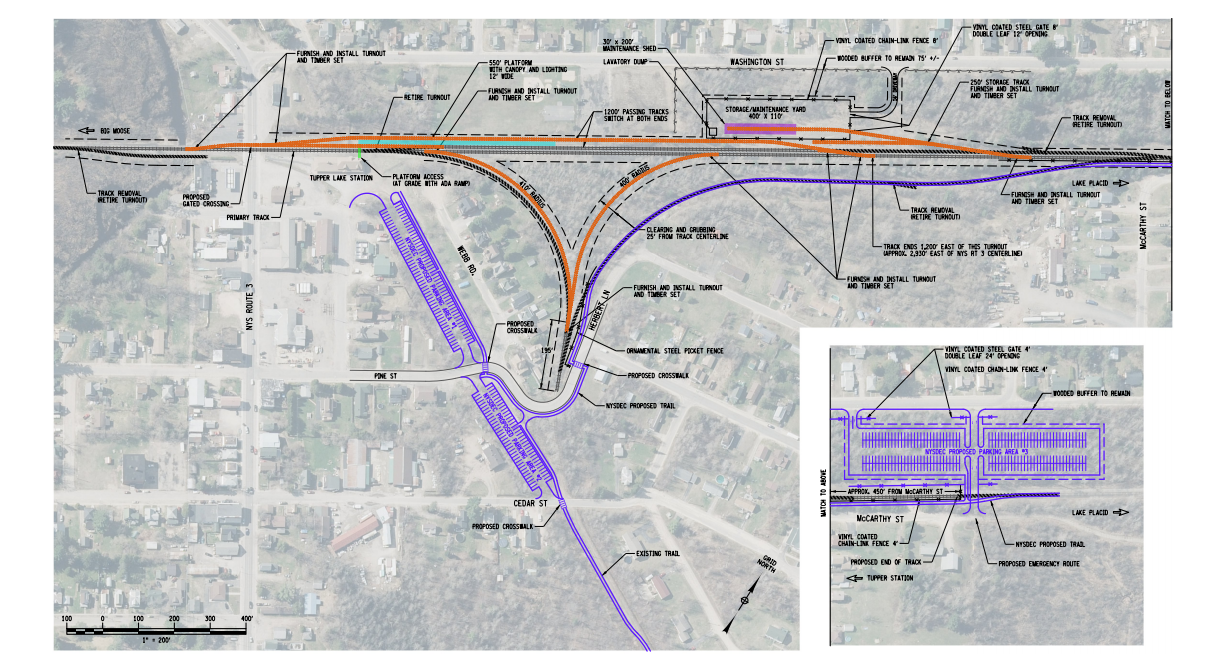 ABOVE: Planned railroad and rail-trail infrastucture in Tupper Lake, new northern terminous of the Adirondack Railroad.

The New York State Department of Transportation (NYSDOT) finally broke ground on the Adirondack Rail Trail at the start of November. Both the rail-trail and planned railroad upgrades are part of the 2020 Remsen-Lake Placid Travel Corridor Unit Management Plan, which aims to bolster tourism and outdoor recreation along the 119-mile travel corridor.

For several years, the state government supporting recreational trail use has fought a continuous legal battle with supporters of rebuilding the former New York Central ‘Adirondack Division’ for rail use from Utica to Lake Placid. As part of a compromise plan the state decided to restore rail service from Utica to Tupper Lake while converting the railroad from Tupper Lake to Lake Placid to a recreational rail-trail.

With legal options exhausted by opponents of the rail-trail plans, the state is free to start construction. The $1.9 million project removes the existing railroad track between Lake Placid, Saranac Lake, and Tupper Lake for conversion to a shared-use recreational trail for cyclists, hikers, skiers, and snowmobilers.

The state also is helping fund a new maintenance facility near Utica Union Station, the Adirondack Railroad’s southern terminus, awarding in 2014 a $791,000 grant to railroad. The 4,800 square-foot building will measure 220 ft. long by 75 ft. wide, with two tracks, an inspection pit, and a repair room. In recent years, the railroad has repaired its rollingstock beneath a highway overpass at the station.

Tupper Lake is a village home to over 3,600 year-round residents, also the home of The Wild Center, a large natural history museum. There is also Big Tupper, a shuttered ski center that has seen various redevelopment plans come and go over the last decade. The new rail-trail will also undoubtedly will become a major tourist draw as well.

Tupper Lake village mayor Paul Maroun spoke to the Adirondack Daily Enterprise… “This has been the most heated issue in the Adirondack Park. I really thought, for the economics and dynamics of the North Country, it should have gone to Lake Placid. Once you tear up a rail, you’re not going to put it back.”

However, continuing in the interview the mayor stated that he is still satisfied with the final result and its benefits to the village. “It was this or nothing, and it’s better than nothing. It’s been so long in the making. And for Tupper Lake, it’s really a win-win.”

Old Forge to the south is a popular summer vacation and winter sports destination, including a water theme park, lake boat cruises, and ski center. Utica as several attractions and its Union Station offers connections by the Adirondack Railroad to the Amtrak system including the NYC-Niagara Falls-Toronto Empire Service/Maple Leaf and NYC-Boston-Chicago Lake Shore Limited

Post COVID-19 pandemic let’s hope that the state and local government will leverage full advantage of using passenger rail to bring visitors to less visited parts of the great Adirondack Park. This should include encouraging downstate residents to take their bikes and other sports equipment on the train to Utica, Old Forge, and Tupper Lake. Mayor Maroun recalled to the Daily Enterprise riding the train in decades past: “It was a beautiful ride to Utica.”