Modern passenger rail can carry large numbers of people longer and faster, more efficiently than ever before. Properly funded and developed, energy-efficient rail networks can help cut fuel use by the transportation sector, and lower carbon emissions.
Environmental Benefits

The Need to get Passenger Rail to Zero Emmissions

New York State with the passage of the Climate Leadership and Community Protection Act in Spring 2019 took a bold step in becoming a leader in confronting the growing danger of global warming. The Climate Act mandates that the state move to a net-zero emission economy by 2050 by eliminating most emissions of greenhouse gases – primarily CO2 – from the burning of fossil fuels.

The Climate Act mandates that the state all but eliminate its greenhouse gas emissions by 2050 through the elimination of the burning of fossil fuels in power generation and transportation. The goal is by 2050 to cut greenhouse gas emissions to 85% of 1990 levels, with the remaining 15% offset by reforestation, wetland creation, or carbon capturing through technological means. A 22-person “climate action council” comprising of top state officials, who will be advised by smaller working groups with expertise in specific areas from forestry to economic development.

The state’s climate bill is nearly identical to legislation passed in the United Kingdom. The Climate Change Act of 2008 calls for net UK greenhouse gas emissions for the year 2050 to be at least 80% lower than the 1990 baseline. Concerning transportation, the current policy of the British government is for all new passenger cars and vans sold in the UK to be zero emissions vehicles – either battery electric, plug-in hybrid electric or hydrogen fuel cells. For the rail sector, transport minister Jo Johnson in 2018 called for all diesel trains to be phased out by 2040.

With one-third of New York State’s emissions being from transportation, both freight and passenger rail will have to be address. For rail transport the most obvious answer to going carbon neutral is electrification, an over century old technology that today is in extensive use moving both heavy freight trains and high-speed passenger trains around the globe. However, there are three other alternatives to the current diesel motive power of most American trains, that of trains propelled by batteries, hydrogen fuel cells, and electricity taken in directly from overhead wires called the catenary. When the electricity that charges batteries, produces hydrogen, and energizes the overhead catenary is produced from renewable energy – from hydro, wind, solar, and nuclear power generation – you can have a zero emission train.

We will show how new green motive power is being developed around the world and how this existing and new techonology can be incorporated into our state’s passenger rail system, creating a sustainable transport service for the 21st century and beyond. Its vital that New York State – through the Climate Action Council, NYSDOT, and the New York State Energy Research and Development Authority (NYSERDA) – began the process to decarbonize rail transport, including commuter rail, intercity rail, and freight rail.

While other states – California being the leader – are moving forward with planning studies and demostration projects for zero emmission trains, New York State has yet to do so, beyond one project for the Long Island Railroad. This needs to change, if passenger rail is to remain the most enviromentally friendly mode of mass transportation, diesel hualed Amtrak, Metro-North, and LIRR trains in New York State need to be replaced by the 2030s with zero emission motive power. 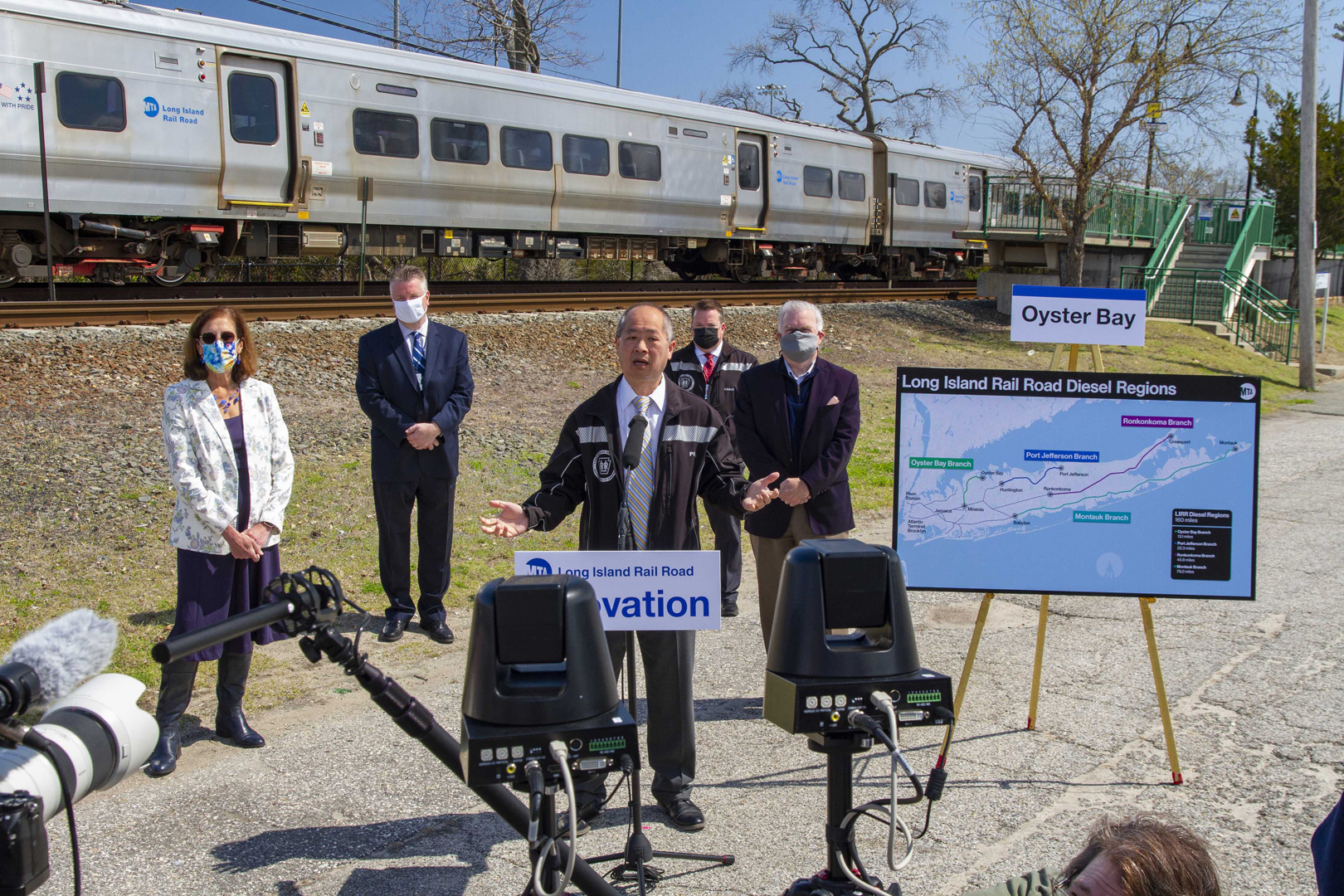 MTA Long Island Rail Road President Phillip Eng announced on April 19, 2021 that the LIRR has entered into an agreement with Alstom to test batteries that could enable electric railcars to travel on the railroad’s diesel branches. Photo: Glen Sager / MTA LIRR

BATTERY TRAINS ON THE LIRR

The Long Island Rail Road in Spring 2021 entered into a $860,000 agreement with train manufacturer Alstom (which has facilities in Hornell, Plattsburgh, and Rochester) for a feasibility study on operating battery-electric multiple units (BEMUs) throughout its system to replace diesel traction over the non-electrified segments of its system.

“This changes the dynamics for how we look at our capital program needs in the future," LIRR president Phillip Eng stated in an exclusive interview with Newsday. "This is an opportunity to really look at a technology that could address this in a manner that is achievable, fundable, and the cleanest form of service that we can think of.”

The plan is to retrofit the railroad’s existing M7 EMU cars with batteries as opposed to ordering new trainsets. The trains would run off the existing DC third rail in electrified territory and then seamlessly switch to batteries in the current non-electrified diesel territory. Charging stations located at the end of branches would re-energize train batteries between runs, the lithium-ion batteries taking about 10 minutes to charge. The LIRR stated that such trainsets would negate the need to further electrify the railroad's tracks, however given the 50-mile (80km) range of Alstom’s existing Coradia Polyvalent BEMU trainsets, this seems unlikely for the Ronkonkoma and Montauk branches without some extension of third rail electrification, due both having long unelectrified segments of 46 and 79 miles. However, both the Oyster Bay and Port Jefferson branches do fall well in the range of battery operation. 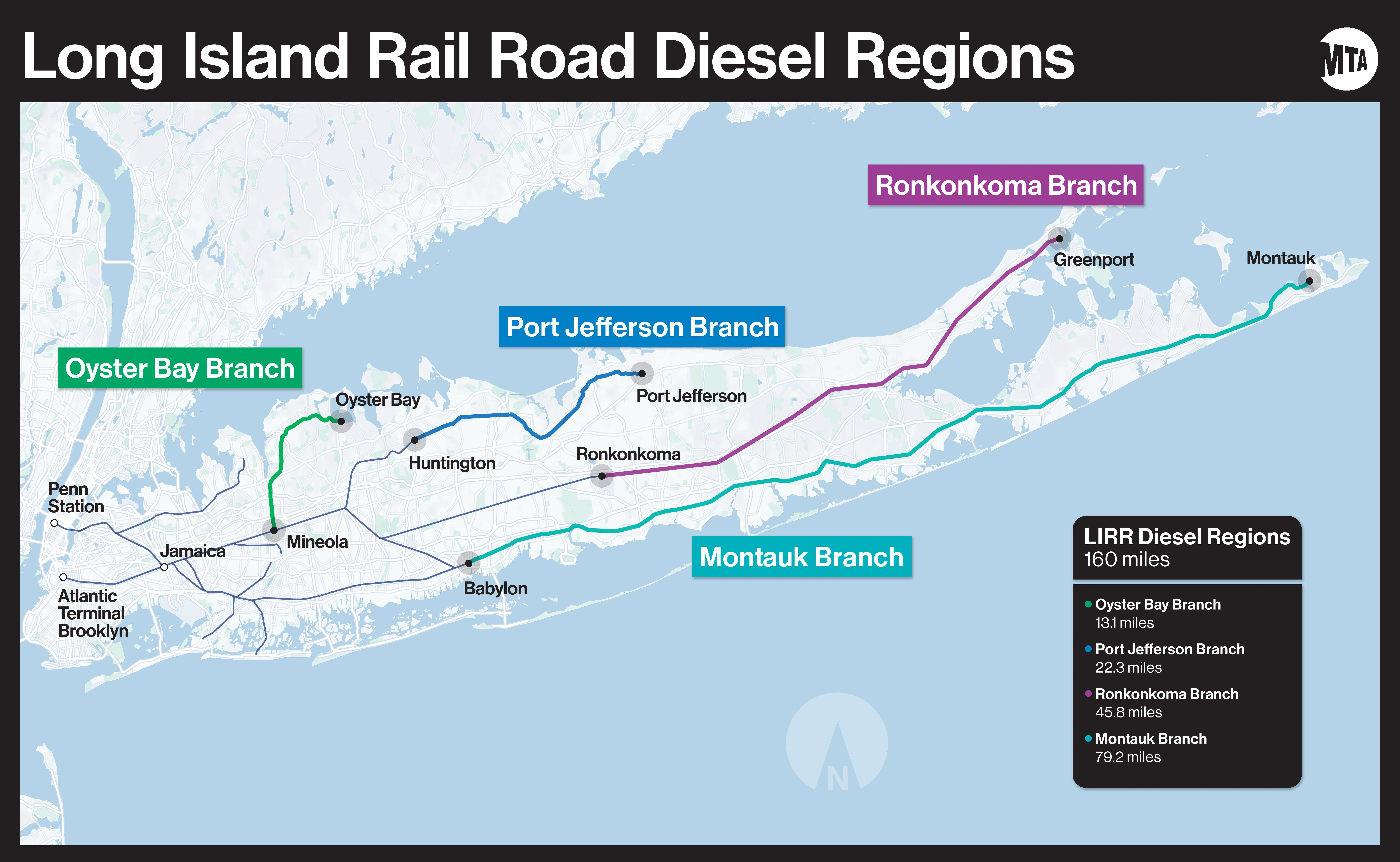 The yearlong study is being funded out of the LIRR's operating budget and will include simulations of battery-powered trains. If determined to be feasible, the next step would be for a pair of M7 electric cars to be equipped with batteries and then tested on a non-electrified branch, likely the Oyster Bay line, which would be fitted with a battery charging station at its terminal. If successful, then the LIRR would convert the rest of the M7 vehicle fleet while incorporating batteries in all new rolling stock orders.

Overall, this is likely the first step being taken by a railroad in New York State that fulfills the goals of the Climate and Community Investment Act of moving to a zero-emission transport system. NJ Transit is following the LIRR in looking at batteries as a way to eliminate diesel traction on lines that are partially electrified today. For long distance services covering over a hundred miles batteries are not a solution due to their lower weight-to-power ratio than diesel or hydrogen fuel cell motive power, however for distances of measure in tens of miles, batteries can lead to all electric motive power while limiting the need to extend either third rail or overhead electrification.